After investigating the difficulty of finding something to watch on Netflix, I created a POC for a "Social" feature which makes it easier for Netflix users to share viewing experiences with their friends.

I undertook this project for my personal interest after noticing how people were spending more time streaming (and looking for) TV and movies during the COVID-19 pandemic.

Can't find something to watch? It's not just you.

If you frequently use Netflix or even any of its competitors, then I bet you’ve at least once experienced the difficulty of finding something to watch. Maybe you recently finished a series and were looking for your next binge watch, or perhaps you had a friend over and spent more time looking for a movie than you did actually watching it.

A quick web search makes it easy to suggest that many people have at some point faced this "Netflix struggle"—to which academics might refer as an instance of choice paralysis. In fact we spend 19 minutes, on average, browsing through the platform before finally hitting "play".

Some frustrated users have responded to this problem by developing websites that offer sorting and filtering capabilities to more easily browse Netflix's library. Others have alleged that Netflix's recommendation system—which was revamped in 2017—is the culprit and are calling for change.

Why should Netflix care?

Market share, of course! Check out how Netflix’s grasp of the market evolved as new entrants joined in 👇

Also, consider that the list of competitors isn’t exhaustive of those available outside of the United States.

When it was almost a monopoly at its inception, Netflix probably didn't have to worry about losing viewership to other streaming services. However, now that American streamers subscribe to 4 services on average, Netflix risks pushing its users to a competitor if they can't find something to watch within a reasonable amount of time.

I hypothesized that, to protect its declining market share, Netflix will have to make it easier for users to pick a movie or TV show that they will enjoy, without having to spend a lot of time scrolling through the platform.

I flipped that hypothesis into a question:

"How might we help Netflix users find the right titles for them, faster?"

To find out how, I spoke with some users. Here's what I learned:

Research wall with user pain points, motivations, behaviours and ideas (raw data to the left, grouped into themes to the right)

Why a Social feature over anything else?

I chose to design Social features after they scored the highest during a prioritization activity.

I reviewed my interview findings to collect my participants' suggestions as well as my own ideas to develop a list of user stories, which I then translated into intervention opportunities scored on the following criteria:

1️⃣ Personal Effort: The size of the challenge of designing this feature for my skill development (the more challenging, the better)

2️⃣ Company Effort: The level of business and technical effort for Netflix to implement the feature (the easier, the better)

3️⃣ Customer Value: Customers' (anticipated) perceived benefit and uniqueness of the feature (the higher, the better)

4️⃣ Business Value: Netflix's potential gain from the feature, mostly in the form of better or more data (the higher, the better)

I then developed additional user stories and two task flow diagrams to establish the scope for my POC.

What inspired the design?

While my priority was to stay as faithful as I could to Netflix’s current design, I needed to introduce new patterns for scheduling a watch party, viewing friend activity, and adding friends. Screens from Apple Music, Spotify, Must (a social network for movie fans), and even Pizza Pizza, offered the best ideas.

And, while sketching saved me from otherwise staring at a blank canvas for hours… 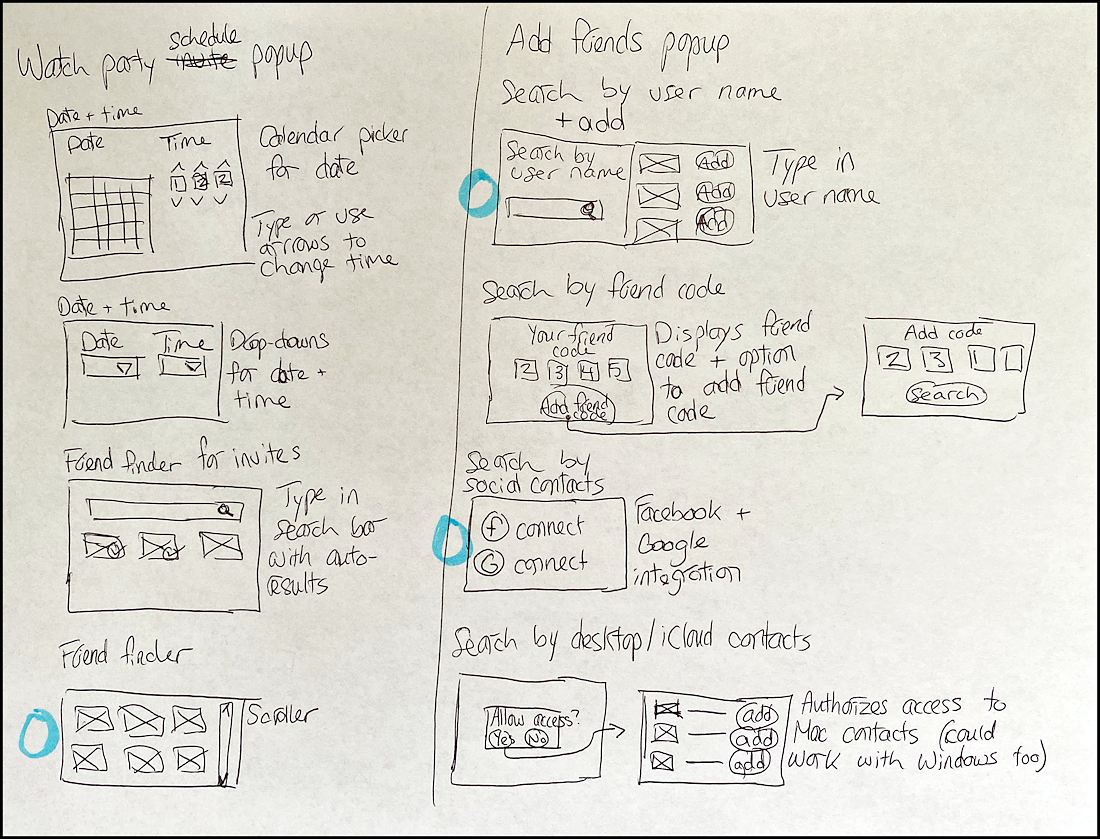 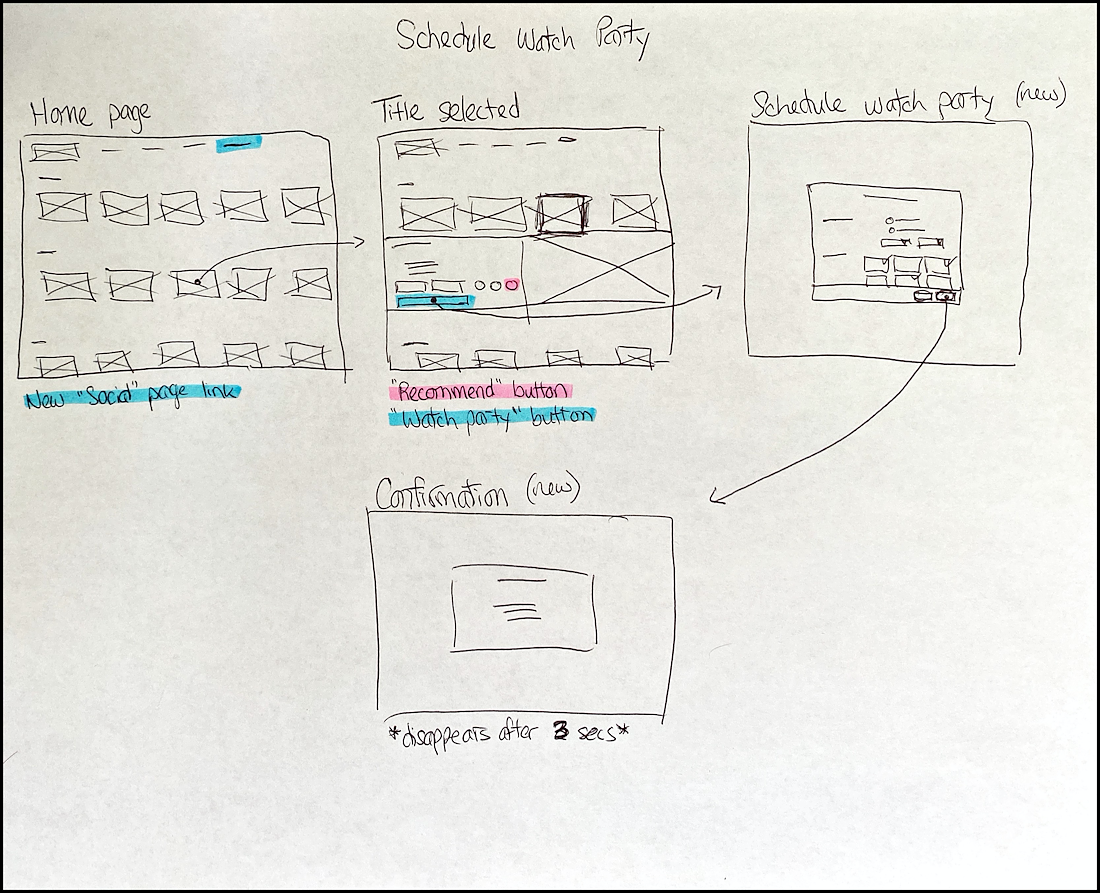 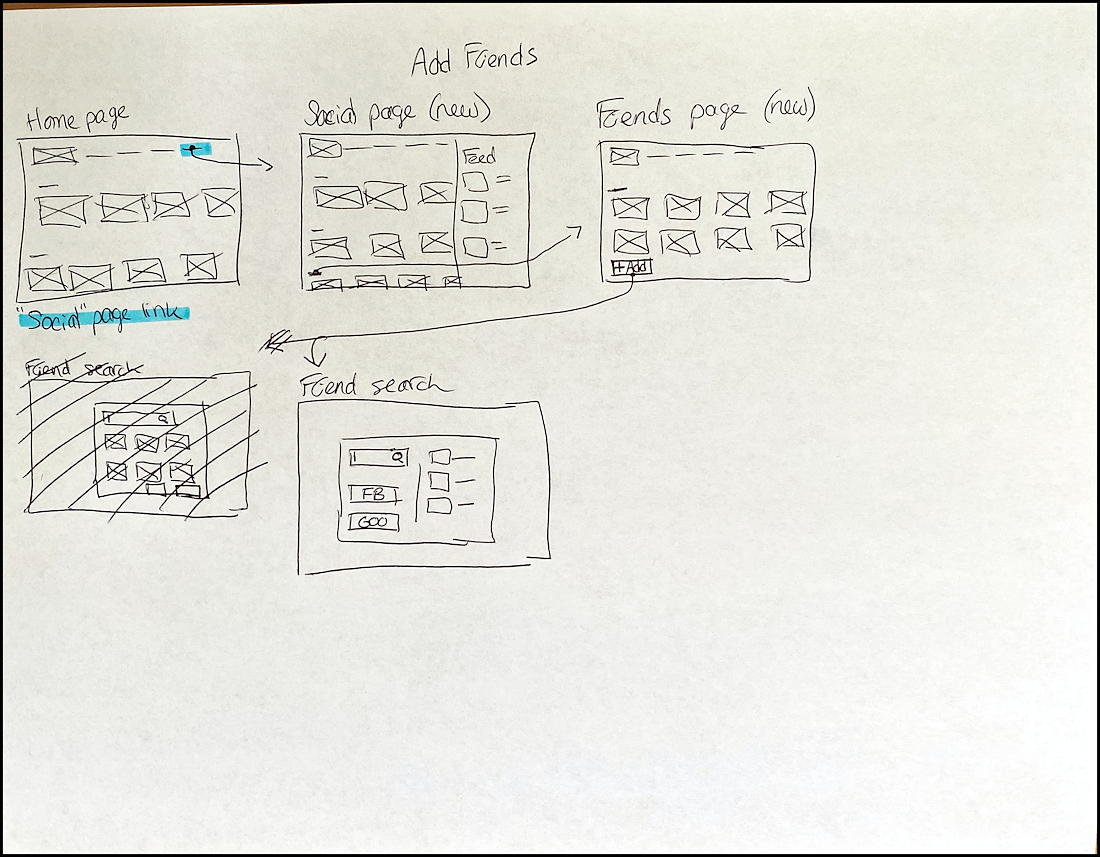 …I still encountered challenges along the way.

1️⃣ I HAD TO PIVOT TO ANOTHER PLATFORM

At first, I wanted to design for a TV-connected app, as it was my users' platform of choice based on my research, but a couple of limitations made it more practical to design for the web app instead:

▫️I only had access to my PlayStation 4 console for a TV app, and the screen-capturing capabilities I needed to most faithfully reproduce the app screens are blocked by Netflix.

▫️I only had the means to scrape movie and TV show thumbnails from Netflix's web app, which are in landscape orientation, as opposed to those on the PS4 app which are in portrait.

I revised my task flows, inspiration board and concept sketches to accommodate the pivot.

2️⃣ I HAD TO CONSIDER WAYS TO UNIQUELY IDENTIFY USERS

One implication of creating Social is that Netflix would have to change the way it individually identifies users so that they can each manage their own friend list. Currently, a single Netflix account can accommodate multiple users, but those user profiles are not uniquely identified across the entire user base.

I considered different approaches to help users uniquely identify themselves and find their friends such as:

▫️Integration with other accounts (e.g., PlayStation Network or Xbox Live, but this is limited to the respective platforms)

I decided to proceed with usernames and social media integration as these were the most practical for cross-platform usage, but I don't discount the possibility of including other mechanisms that might be more practical for any given platform.

I took on this project with the assumption that Netflix's design has been extensively researched/tested and is strongly justified, so I didn't want to propose any big changes to its UI. So, in absence of a style guide or design system, I did my best to think about how Netflix might adopt my additions into its design.

One addition that posed challenges, however, was guiding users to the Friends page. In my original design, the Friends page was accessible by clicking on the subheader of a "previewer" row that was included at the bottom of the Social page. A hover state indicated that users could click to view/manage their friend list (see the animations below).

However, during testing, users did not realize they could click on the header. Perhaps the missing chevron could have made a difference, but I nonetheless decided to give the link more visibility by placing it on the Friend Activity sidebar instead.

My original design for accessing the Friends page

With Netflix Social, everybody wins!

USERS CAN BENEFIT BY:

🔹 Finding out what their friends are watching, without having to leave the app

🔹 Receiving recommendations from people that truly know them, not just from an algorithm

🔹 Bonding with their friends through film and television, even when physically apart

NETFLIX CAN BENEFIT BY:

➡️ Too many choices: A problem that can paralyze

➡️ Why Netflix's 'thumbs up, thumbs down' rating system is fundamentally flawed

Have any questions? I would love to hear from you!